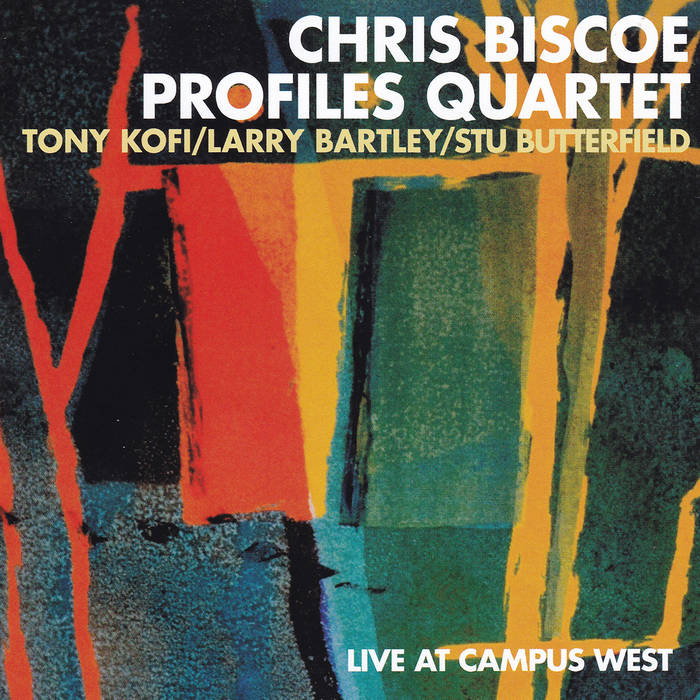 The quartet with Tony Kofi, Larry Bartley and Stu Butterfield set out to explore innovations brought to jazz by Eric Dolphy, a remarkable virtuoso who combined many of the virtues of bebop and earlier jazz forms with an open-mindedness matched by few other musicians. His interest in using natural sounds and the inspiration he drew from music of different cultures has become increasingly accepted by succeeding generations of musicians.

Our repertoire draws on Eric Dolphy's own compositions, which give a clear insight into his rhythmic and harmonic approach, a selection of pieces drawn from his recordings with other bandleaders (Oliver Nelson, Charles Mingus, John Coltrane), and tunes such as Jitterbug Waltz reflecting Dolphy's Catholic tastes.

The Quartet is also the core of the Mingus Profiles Sextet. As the band has developed we have incorporated material from the Sextet's Mingus repertoire and now perform as the Profiles Quartet.

On this CD recorded at a club gig for Hertford Jazz in 2011 you can hear some tunes (Les, Out to Lunch, Potsa Lotsa) which are also on our studio CD Gone in the Air. These versions are longer and more varied in texture, reflecting our experience of working together and the freedom of performance which comes with live performance.

I play the theme of Something Sweet, Something Tender on unaccompanied alto sax as an introduction to Out to Lunch and Potsa Lotsa. These three pieces are played without a break, although they have different track numbers. Out to Lunch finishes with a bass solo by Larry Bartley based on melodic motifs from that tune, which he then transforms into the opening riff of Potsa Lotsa, at which point I join him on alto clarinet.

Fables of Faubus is a great Charles Mingus piece that Eric Dolphy played on many live performances with Mingus and on the remarkable studio record Mingus Presents Mingus.

Eric Dolphy was an admirer of Thelonious Monk, dedicating Hat and Beard (from Out to Lunch and also heard on our first CD) to him. He played Epistrophy when working as a soloist with various bands and it appears on the radio broadcast at the end of his life which was released as Last Date.

Open Book and The Man Who Never Sleeps are played as one piece, but have separate track numbers on this record. Open Book starts with a transcription of the first part of Booker Ervin’s solo on Open Letter to Duke, from Mingus Ah Um. Stu Butterfield's drum solo leads into The Man Who Never Sleeps, a Mingus self-portrait which features Tony Kofi on tenor saxophone.

Reviews:
Saxophonist Chris Biscoe has already made a fine homage album to Charles Mingus, and here he turns his formidable technique and musical intelligence onto great free jazz innovator Eric Dolphy. It’s an austere listen with no harmony instrument in the quartet, and the richness of Mingus’s The Man Who Never Sleeps suffered somewhat. But it’s an invigorating listen, as Biscoe and fellow reedsman Tony Kofi relish the challenge of capturing Dolphy’s complexities in just two melodic lines.
Ivan Hewett, Daily Telegraph

The English saxophonist Chris Biscoe follows up earlier album projects on two of his abiding obsessions, the music of Eric Dolphy and Charles Mingus, with this live set combining material by or associated with both musicians. The Profiles Quartet features Biscoe on alto saxophone and alto clarinet alongside Tony Kofi on alto and tenor saxophones (both show clear Dolphy influences in their approach to alto), with Larry Bartley well featured on bass, and Stu Butterfield on drums.
They form a cohesive, highly energised unit, but allow themselves ample freedom to explore the material, which includes compositions by Thelonious Monk and Oliver Nelson associated with Dolphy. Lengthy investigations of Monk’s Epistrophy and Dolphy’s Out To Lunch and Potsa Lotsa are among the highlights of the set, recorded at the Welwyn Garden City venue Campus West in 2011.
The Scotsman

British multi-instrumentalist Chris Biscoe began playing the alto saxophone in 1963, just one year before the death of Eric Dolphy. On Live At Campus West Biscoe and his Profiles Quartet pay tribute to Dolphy's legacy with new arrangements of tunes associated with Dolphy as a composer and player, drawing on music from the American's brief but stellar career and once again placing it firmly center-stage.

Live At Campus West was recorded on January 30th 2011 and features four of Dolphy's compositions alongside Charles Mingus' "Fables Of Faubus" and "The Man Who Never Sleeps," Thelonious Monk's "Epistrophy" and Biscoe's "Open Book." Partnering Biscoe in the Profiles Quartet front line is fellow reeds player Tony Kofi. The pair both double on instruments - Biscoe on alto sax and the relatively unusual alto flute, Kofi on alto and tenor saxophones - and make excellent use of the different combinations on offer.

Biscoe and Kofi may grab the lion's share of the spotlight, but their success is due in no small part to bassist Larry Bartley and drummer Stu Butterfield's sterling rhythm section playing. The four men thrive on each other's energy, respecting the compositions while investing them with terrific verve and enthusiasm. The result is a fiery display of musical skill, dynamics and almost telepathic understanding between the players. There are sensitive moments too, most notably Biscoe's unaccompanied alto sax on "Something Sweet, Something Tender" and the interplay between Biscoe and Kofi on "The Man Who Never Sleeps."

Although the excellent sound of this recording readily brings to mind images of smoky jazz cellars, the Campus West referred to in the album's title is not a glamorous Californian nitespot from the glory days of Dolphy, Mingus, Monk and the rest. It's in the marginally less glamorous Welwyn Garden City, a few miles north of London - but on the evidence of Live At Campus West it was for at least a few hours one January night a place where the spirit of those great players one again burned bright.
Bruce Lindsay - All About Jazz

Some of the most exciting contemporary live jazz – Alex Bonney’s Albert Ayler-inspired gigs, Dog Soup’s viscerally exciting take on electric-period Miles Davis, Liam Noble's Brubeck interpretations spring immediately to mind – involves musicians revisiting the music of figures who have inspired them, and this Chris Biscoe Profiles Quartet performance, which centres on music composed by or associated with Eric Dolphy, is right up there with the best.

There is something uniquely exhilarating in Dolphy’s overall sound and approach, his music seeming to stream out of his bands in a joyful, intoxicating rush, and Biscoe’s quartet – completed by alto player Tony Kofi, bassist Larry Bartley and drummer Stu Butterfield – perfectly emulates the great master in this respect, the front-line horns meshing in a wild, exuberant wail that immediately brings the great man’s music to mind.

Biscoe must be one of the most underrated figures in UK jazz, his unassuming, learned demeanour belying a soloist of passionate (and unfailingly inventive) intensity, whether he’s playing alto or alto clarinet; Kofi, as he proved so memorably in his Monk-inspired album, All is Know (and there is an impressive performance of Monk’s ‘Epistrophy’ here), is a past master at applying his pleasingly astringent tone and urgent improvisational fecundity to classic bop and post-bop jazz, so their combined force is considerable, and in Bartley (one of the steadiest yet most subtly propulsive bassists currently operating in this country) and Butterfield (all buoyancy and spring) they have the perfect rhythmic foils.

There is some duplication of material (‘Les’, ‘Out to Lunch’, ‘Potsa Lotsa’) from the quartet’s 2008 studio album, Gone in the Air (Trio TR578), but the eight-minute visit to the Mingus classic ‘Fables of Faubus’ is worth the price of admission alone, and this hour-long Herts Jazz concert, recorded in 2011 at Welwyn Garden City, documents a first-rate performance from a polished but wonderfully vibrant band.
Chris Parker - London Jazz News