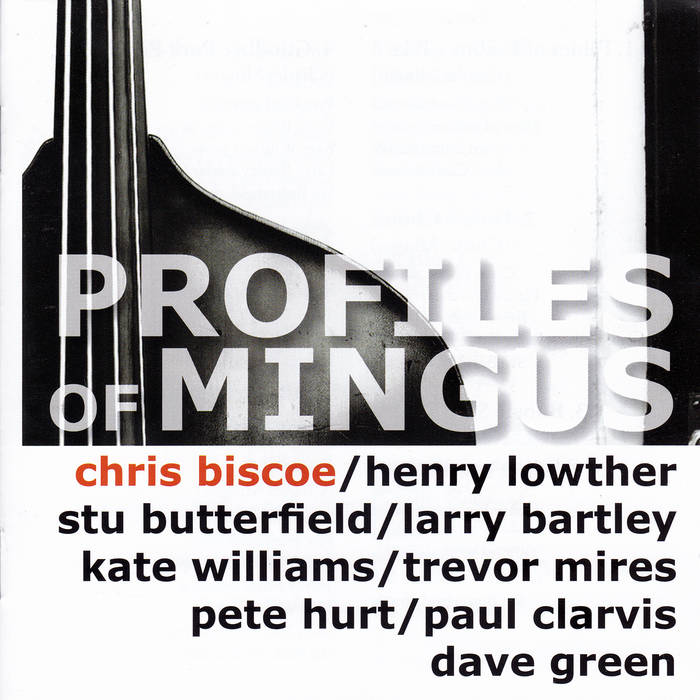 The first Charles Mingus record I bought was Mingus Ah Um and it’s still my favourite. It has everything: gospel, blues and ballads, great passion and lyricism, as well as heartfelt and characteristically original tributes to Duke Ellington, Charlie Parker, Jelly Roll Morton and Lester Young, What strikes me now is that every track is a portrait of some sort, and we have used this as the theme of the recording.

On this recording there are several different line-ups: solo improvisations, the quartet A Pair of Braces, which derives from occasional meetings of two duos - Lowther/Clarvis and Biscoe/Butterfield, and, principally, Mingus Moves.

Mingus Moves, formed in 1996, exists in various formats. Starting as a sextet, with trumpet, trombone, saxophone, piano, bass and drums, it has adapted to circumstance and venue; sometimes operating without piano, replacing trombone with tenor sax or expanding to a septet. Most of these variations appear on this recording, reflecting the history of the band.

“Fables of Faubus”, including Mingus’s lyrics satirising the notorious Governor Faubus of Arkansas, also appears, alongside “All The Things You Could Be By Now If Sigmund Freud’s Wife Was Your Mother" on the extraordinary quartet record Mingus Presents Mingus.

Some of the band tracks use arrangements and solo sequences that are similar to the original performances, although changes in instrumentation and interpretation make them sound quite different. I’ll just point out the tracks where new material has been introduced.

“Duke’s Choice” is part of the suite “Open Letter to Duke” and after the ballad theme takes a double tempo riff from the suite as the basis for a collective statement from the whole band.

Mingus was one of the first jazz composers to use overdubbing in his recordings, most importantly on Black Saint and the Sinner Lady. “Boogie Stop Shuffle” uses the four horn voicings from Mingus Ah Um, and I’ve overdubbed some alto clarinet to give it a different flavour.

“Goodbye Porkpie Hat” is a beautiful memorial to the great tenor saxist, Lester Young. Written shortly after his death in 1959, lt featured John Handy on tenor sax. We start the tune with unaccompanied tenors, then Larry Bartley enters with a lovely improvised counter-line. This version has two solos, with Pete Hurt playing over the chord changes of the melody, while my solo is on a variant of a minor blues.

On Mingus Ah Um, the solos on “Pussy Cat Dues” are based on the blues but, inspired by Charles Mingus’s use of extended structures, I’ve written a solo sequence in 3 parts, incorporating the blues, a chromatically descending section and the chord sequence of the melody.

“Blue Cee” is from The Clown and is one of Charles Mingus’s simplest compositions. I’ve written two additional lines, which are played separately, then together with Mingus’s theme.

The final element in this recording is a series of solo improvisations:

“J-Yarde”, a foreword to “Reincarnation of a Lovebird” (Mingus’s dedication to Charlie Parker), is a free improvisation with more of the Yardbird than the Lovebird in it, and is dedicated to saxophonist Jason Yarde.

“Martha and Daughter” is a gentle introduction to the fireworks of “All The Things You Could Be By Now If Sigmund Freud’s Wife Was Your Mother” (Martha was Sigmund’s wife For 53 years, and one of her children was the distinguished psychiatrist Anna Freud.) It’s based on the chords of “Self- Portrait in Three Colors”.

Finally, “Bass Notes” is an impression of Mingus by Dave Green, doyen of British bass players and leader of Fingers, one of the pioneer bands dedicated to the music of the most remarkable of all bassist/composer/band leaders - Charles Mingus.

Reviews
With its soloists skilfully deployed for maximum effect (the contrast between the saxophone styles of Biscoe himself and Hurt particularly telling) and each piece addressed with suitable passion laced with intelligence and respect, Profiles of Mingus comes highly recommended.
Chris Parker - Vortex Website, May 17th 2010

On “Fables of Faubus”, trumpeter Henry Lowther belligerently phrases against a lopsided, menacing 4/4 as Chris Biscoe’s alto saxophone dodges the oncoming bar lines. It’s essentially Mingus refracted through the spirit of Ornette. “Boogie Stop Shuffle” is more literal: an augmented frontline loyally re-creates the wah-wahs and brass stabs of the iconic 1959 Mingus Ah Um setting, but with solos that remain boldly discursive. Mingus’s credo licensed musicians to transform his complex written material as the moment demanded. Biscoe and Lowther respect the compositional integrity of “All The Things You Could Be By Now If Sigmund Freud’s Wife Was Your Mother” while teasing out oblique improvisational responses from its structure. If only those sanctioned ‘ghost’ ensembles, the Mingus Big Band and Orchestra, would play his music with this level of spontaneity, soul and sneer
The Wire

Chris Biscoe established Mingus Moves in 1996, a flexible ensemble (workshop?) with a floating personnel and numbers, reflected on this record by different line-ups, ranging from solo - Kate Williams on her own PSPPH, Biscoe on J-Yarde and the alto clarinet feature Martha And Daughter, Dave Green on Bass Notes, these being the non-Mingus tracks - to the double-duo arrangement of A Pair Of Braces on the two takes of Fables of Faubus and All The Things to full-band cuts, including one with an overdubbed alto clarinet part from the leader. In movement and feel, this is much closer to an authentic Mingus set than most of the wannabe units that have tackled this material and that's a vital aspect of its success.

Biscoe has been around this material for long enough to be aware that simply playing the head melody and then blowing isn't an adequate approach to Mingus's music It's a body of work that requires something approaching a paradigm shift from the leader: the composition is more than an armature for the solos, which flesh out the core idea rather then departing expressively from it. That's clear even on Goodbye Pork Pie Hat, the only real repertory piece here, where the two tenors share out solo space that cleaves exactly to the contours of the song.
The saxophonist's respectful but imaginative approach to the material is best represented on Blue Cee (from 'The Clown', I think), where he takes a very stripped, almost abecedarian line and adds something to it, creating what is in effect a new composition, but one resolutely dependent on Mingus,s own structure In the same way, William's solo piece is a meditation on Goodbye Pork Pie Hat; J-Yarde is a boppish prelude to Reincarnation Of A Lovebird and Martha And Daughter (Freudians will get the reference) that finds the tender heart of All The Things.

Biscoe's earlier Dolphy project was impressive enough. This, though, and I suspect he recognises the difference himself, is at a higher level of organisation, both in terms of material and musical ambition. It illustrates all the things that modern jazz could have been if Charles Mingus had been recognised as a father figure instead of marginalised as a bad uncle.
Brian Morton - Jazz Journal August 2010