Gone In The Air 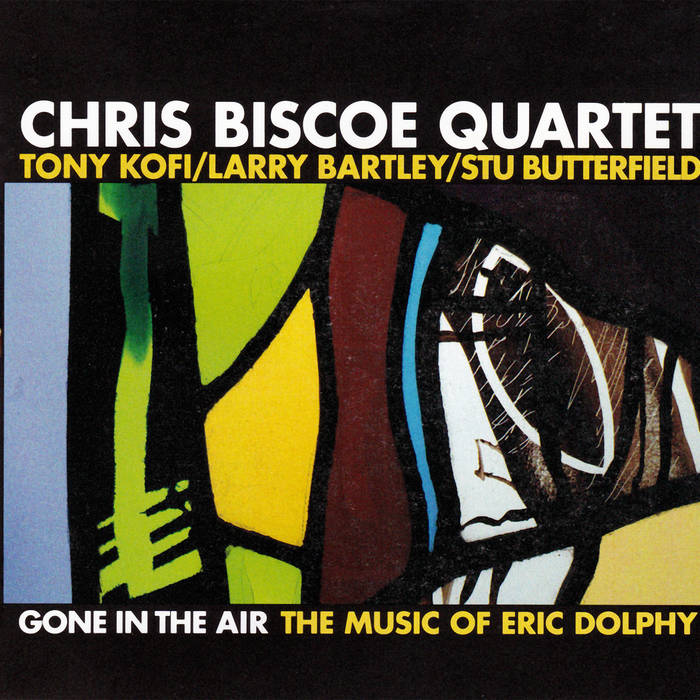 On Les and Jitterbug Waltz Tony Kofi plays the first sax solo. On Out to Lunch and Miss Ann Chris Biscoe plays first. The solo on 245 is by Tony Kofi.

I read about Eric Dolphy before I heard his music. What I read, about a man radically extending the language of the saxophone while remaining in the jazz tradition, immediately attracted me, and predisposed me to like his music. I also read that Ornette Coleman was an iconoclast tearing jazz apart. What I didn't know, until I heard their records, was that Ornette Coleman's tunes and melodic improvisations would be immediately attractive to a relative newcomer to jazz, while some of Eric Dolphy's playing would sound to me like someone who had gone one step too far.

Forty-something years later I still find Dolphy far from easy listening but impossible to ignore. Looking again at Eric Dolphy's recordings it is more evident than ever that the blues and pre-bop jazz were an essential part of the mix with natural sounds, classical music, and post-bop jazz that went to make up his unique sound.

This project started a few years ago (musicians who've participated in my first experiments with Dolphy include Hans Koller, Liam Noble, Pete Hurt, Mark Hanslip, Dave Whitford, Dave Wickins, Steve Watts and Dave Barry as well as Stu Butterfield) but in 2007 I decided on the format you hear in this record, and our first performance was in May 2007.

At different times in my life. and according to the musical context the influence of Eric Dolphy on my playing has varied, but always been present, especially when playing alto sax and alto clarinet. On this recording it is less overt than during some other periods of my life, but l hope that I'm absorbing the ideas rather than reproducing them.

I'm delighted that Tony Kofi could be my front-line partner in this project. His solos explore areas I don't, and I think our ensemble sound captures some of the intensity of the Eric Dolphy groups. Larry Bartley and Stu Butterfield create a sound that is unmistakeably modern, while calling to mind the feel of those great 1960s rhythm sections.

In 1961 Stu Butterfield saw Eric Dolphy play in Newcastle upon Tyne with the John Coltrane Quintet. Stu says: 'I wish I'd known then what I know now' - but don't we all.

Serene: an unusual variation on a twelve-bar blues, it originally featured bass clarinet. My unaccompanied alto clarinet introduction is based on the chords of the tune. Hear the original on Eric Dolphy's second album as leader, Out There.

Les comes from Dolphy's debut album, Outward Bound, featuring Freddie Hubbard, and also appears on some later live recordings. The theme is 14 bars long (played twice), and has elements of the 12-bar blues form, with a 2-bar tag.

The solos were based.on the 14-bar sequence. In our version, I've lengthened each chord to give more time to explore the relationship between Dolphy's melodic ideas and the underlying chord. Solos are over 32 bars plus a 4-bar tag.

Out To Lunch: a definitive Eric Dolphy composition, the title track of his most famous record, and one of the pieces in which he begins to break with jazz tradition. The solos are freely based on the melodic structure.

245 is also from Outward Bound and follows the classic 12-bar blues form.

Jitterbug Waltz appears on the 1963 record Conversations. Fats Waller's tune is a reminder of Dolphy's affinity with pre-bop jazz. Listen to The Newport Rebels, on which Eric Dolphy plays with great fire, while being a natural partner to swing era giants Roy Eldridge and Jo Jones.

Potsa Lotsa (also known as Number 8) starts with an 8-bar latin riff, followed by a swinging 10-bar theme. The Eric Dolphy/ Booker Little Quintet recording features alto sax soloing over the chords of the 10-bar sequence. For our recording I've chosen to play alto clarinet, allowing me to double the bass line on the latin riff, and opened up the solo sequence to give more breathing space. We start each solo with 8 of the 10 bars, extend the next 2 bars to 8 bars, then add the 8-bar latin riff, making a 24-bar solo sequence.

Miss Ann first appears on the album Eric Do!phy-Booker Little Quintet- Far Cry but is also on several performances recorded during European tours. Like Les it is a 14-bar theme with elements of the blues in the chord sequence and, in the original, the solos are over the 14-bar chord sequence. I combined the melody notes with the chord tones to make up a kind of note row for each chord, and Tony and I solo on a 24-bar sequence.

Hat and Beard is another composition from Out To Lunch, and quite different to the earlier blues and bop influenced pieces. It starts with a 9 beat bass figure and the improvised section springs from this.

Gone in the Air: the title is a quote from the June 1964 interview Eric Dolphy recorded in Holland, some of which appears on Last Date. At the end of our recording session I decided to play some alto flute while Stu, Larry and Tony were packing up and winding down. As it happens, we were still being recorded.

REVIEWS
....an exhilarating, heady rush of music....There are few sounds in the music as distinctive and joyously vibrant as a Dolphy-led band in full flight, and Biscoe's quartet .... recapture the fiercely life-affirming quality of the great man's manner perfectly, Biscoe all daring intervallic leaps and wailing urgency, the intelligently complementary Kofi his astringent but powerful self, Bartley lithe and propulsive, Butterfield briskly, bouncily percussive in the best 1960s manner but none the less himself throughout. Strongly recommended.
Chris Parker, Vortex Website, May 2008

The late Eric Dolphy would have been 80 this year and this magnificent recording is Chris Biscoe's tribute to a remarkable talent. .... he's chosen a delightful programme of Dolphy's compositions plus Jitterbug Waltz and Stolen Moments which Dolphy also recorded. The playing is spot on. Great sleeve notes. I hope this will be a winner.
Peter Bevan, Northern Echo 05.06.2008

Big, robust soloing from Biscoe and Kofi, with great support from Bartley and Butterfield. These guys are swinging hard. It’s an honest tribute to Eric Dolphy and the music is played with passion and authenticity.
Julian Joseph, Jazz Line-Up, BBC Radio 3, 14.06.2008.

Biscoe’s ability to bridge sound worlds as different as Evan Parker’s and Charlie Parker’s makes him one of the most formidable European saxophonists... ....a contemporary quartet devotedly rooted in advanced bebop, but so clamorously enjoying it that the music sounds remarkably new. Dolphy classics from the Outward Bound and Out to Lunch albums are here, but also sizzling versions of covers he liked playing, including Oliver Nelson’s Stolen Moments and Fats Waller’s Jitterbug Waltz.
John Fordham, The Guardian 20.06.08

That splendid saxophonist Chris Biscoe takes the music of his idol, Eric Dolphy, as the programme for this tremendously enjoyable CD. He's joined by altoist Tony Kofi in the front-line of a pianoless quartet pushed along with zest by bassist Larry Bartley and drummer Stu Butterfield. The exchanges between Biscoe and Kofi crackle with intelligence and invention. This is jazz of real fire and drive, and performances of Serene, with its astonishing solo opening from Biscoe, Out to Lunch and Stolen Moments have much to savour.
Andrew Vine Yorkshire Post 27.06.2008

This tribute album led by the reliably excellent Biscoe .... evokes a characteristic Dolphy world both by covering some of his most well-known tunes, and through the quartet’s on the- edge-of-free but still boppy ensemble vibe.
.... the rhythm section of Larry Bartley on bass and Stu Butterfield on drums swings freely.
Phil Johnson, The Independent, 29.06.2008

Alto saxophonists Chris Biscoe (who also plays alto clarinet and flute) and Tony Kofi are the main soloists, and both individually and jointly they evoke the distinctive ‘cry’ that Dolphy always brought to his playing. Both, in their different ways, seek always to avoid cliches, and to make their statements both personal and genuinely innovative. The outcome is music which is utterly compelling.... Bassist Larry Bartley and drummer Stu Butterfield provide admirable support.
Pete Martin, Jazz UK Issue 82, August/September 2008

Spirits of adventure infuse this release.... Biscoe and Kofi complement each other wonderfully. Stu Butterfield.... and bassist Larry Bartley have to perform the delicate task of underpinning the music without gluing it down, and this they do brilliantly. A most enjoyable disc.
Brian Glasser, Jazzwise August 2008, Issue 122